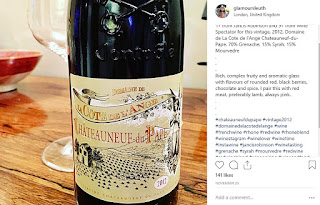 70% of Instagram content goes unseen.  Ever wondered why that carefully created photo (or instant snap, for that matter) that you posted on Instagram only received one or two likes?  You thought it was a great pic…. they obviously didn’t.  You gave it a caption (title) and then you waited….and nothing happened.

Having scrolled through thousands of Instagram posts over the last few months – posting about wine and food – I learnt the hard way that a post without hashtags is a post that most probably won’t be seen, and certainly won’t bring you lots of followers and likes.

2.   Do hashtag research – don’t guess - use the Instagram app or your desktop (which I find easier) to find hashtags relevant to your post and immediately see how many posts there have been for that hashtag. 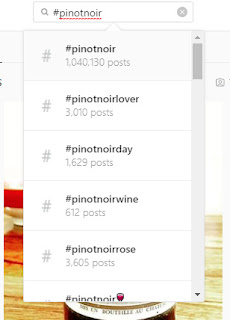 You can use a hashtag finder such as http://best-hashtags.com/ but try and get as specific to your subject as possible.  For example don’t use ‘#PinotNoir’, use ‘#SantaBarbaraPinotNoir to search.

You’re in huge competition for very generic hashtags such as – from this list – #wine,  and don’t include hashtags that are not relevant to your photo.  That really annoys people

So to recap, use Instagram to give you hashtag suggestions from the search box, use relevant hashtags, and stay away from generic highly competitive hashtags as much as possible.

3.   Write an interesting caption – it doesn’t have to be too long – although some people write seriously long posts.

5.    If, as you should do, you specialise in one theme, such as wine, food, food and wine, travel etc, build up hashtag lists so that you just have to edit them when posting to change out those which are not related to your photo and add in those that are more relevant.

If you’ve received a lot of attention to a post with particular hashtags relevant to your picture, you can copy your hashtag list from that post – go to the post, click on the three dots on the top right then click on edit/tap on the list and click on select all/copy.  Then go to your new picture and paste.  You’ll get everything, including your original caption and some hashtags you’ll want to change, but they’re easy to edit from your new post to be.

If you want to get found on Instagram you need to use hashtags.  Sometimes you’ll find a post that doesn’t appear to have any hashtags.  Hmmmm.  Check the comments.  Somewhere in there you’ll find a comment by the writer of the post which includes their hashtags.  Clever?  No not really.  It makes the post look better, but to do this and have it work they’ll be using a post scheduler – I’ll write about those soon.
Posted by Patricia Davidson at 08:55

Email ThisBlogThis!Share to TwitterShare to FacebookShare to Pinterest
Labels: Hashtag Rules, Hashtags on Instagram, How to use Hashtags, Social Media Tips